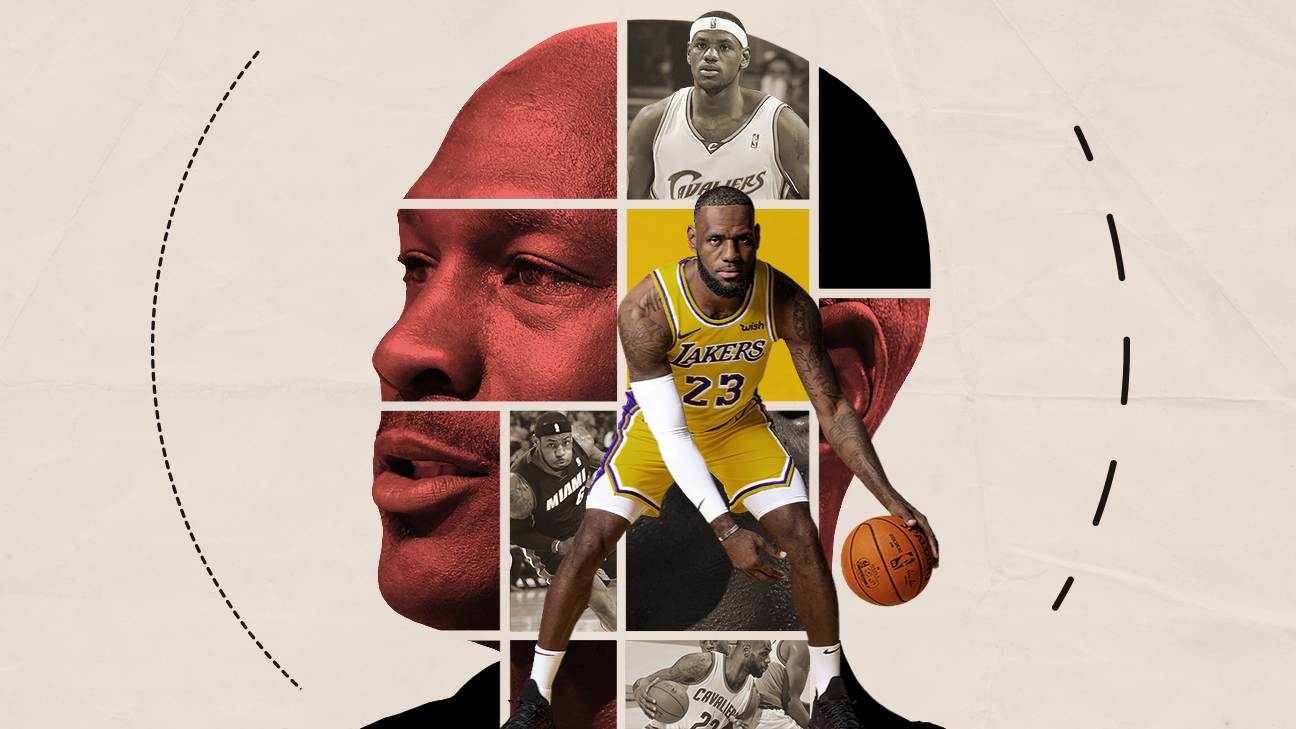 While arguments can be (and have been) made for Kareem Abdul-Jabbar, Kobe Bryant, Magic Johnson, Bill Russell and other NBA greats, the modern debate over who is the greatest since the NBA began has been boiled down to MJ vs. LeBron.

The two never met on the court; Jordan retired for the third and final time (as a Washington Wizard), two months before the Cleveland Cavaliers made James the No. 1 overall pick in 2003. They’ve dominated the NBA discourse for the better part of four decades, ranking first and second in playoff points scored (LeBron over MJ) and Finals MVPs (MJ over LeBron). Their names are all over the NBA record books in just about every category.

So with apologies to legendary boxer Muhammad Ali — who claimed “greatest” status for himself and popularized the acronym — here is everything you need to know about who might be the NBA’s GOAT.

How LeBron can top Jordan for GOAT status

We asked our ESPN Forecast panel a series of questions to get at the heart of the GOAT debate. For most of our panel, Michael is still the man; but that doesn’t mean the argument is entirely one-sided, nor does it make the opinion unanimous.

LeBron vs. MJ: The GOAT debate is different now

At minimum, it’s a debate now. Jordan backers can no longer shout “6-0” and declare it over. Maybe it’s a matter of taste. There is a chance, maybe a good one, James drives this GOAT conversation closer to a consensus than anyone would have imagined possible a decade ago. — Zach Lowe

For Jordan partisans, the Bulls’ 6-0 record in Finals series is indisputable proof of his superiority. For James believers, his 10 Finals appearances are emblematic of LeBron’s longer record of accomplishment. But what do LeBron’s and MJ’s overall Finals track records really tell us about the choice between them as the greatest of all time? — Kevin Pelton

Ranking the greatest players of all time

These debates rage on endlessly in every corner of NBA fandom, and our experts have done their best to answer them, ranking the greatest players in the league’s 74-year history. ESPN’s NBA expert panel voted on thousands of head-to-head matchups, taking into consideration both total career value and peak performance.

A new poll commissioned by ESPN in 2020 found 73% of NBA fans believe Jordan is the superior player overall, and the Chicago Bulls legend swept all 17 questions comparing him to James by metrics both on and off the court.

NBA GOAT debate: Big questions on the greatest players ever

Do legends such as Wilt Chamberlain, Bill Russell, Magic Johnson and Kareem Abdul-Jabbar have a stronger case than Michael Jordan? What about LeBron James? And what qualities make one player the GOAT? Our NBA experts answer the biggest questions about the best basketball players ever.

LeBron James is far from finished. Winning a fourth NBA title and leading a third team to a championship might not only be the pinnacle of his basketball career, but in life, at 35, James is just getting started. There are so many more mountains to conquer. — William C. Rhoden

LeBron and MJ in their own words through the years

Who is the real GOAT? The debate rages on. On your television. In the comments section. In your Twitter replies. But it doesn’t matter what we say. Here are Jordan and James, in their own words, talking about each other over nearly two decades.

Michael Jordan and Bulls owner Jerry Reinsdorf recount a funny conversation when discussing his recovery from a foot injury. The Last Dance premieres on ESPN on Sunday, April 19th at 9 pm ET.

In the fall of 1997, Michael Jordan and the Bulls began their quest to win a sixth NBA title in eight years. With a film crew following them all season, “The Last Dance,” as coach Phil Jackson called it, would be shadowed by tension and an overwhelming sense that their storied run was coming to an end. The Emmy Award-winning 10-part documentary is now available on Blu-ray for a limited time.

‘More Than An Athlete’

In the latest episode of “More Than An Athlete,” LeBron James says his historic 2016 NBA Finals win made him the greatest player ever. Go to ESPN+ and subscribe now to view full episodes.

“More Than An Athlete” is an eight-episode series that examines the various stages and moments of LeBron James’ journey from basketball prodigy to global sports icon, businessman and philanthropist through the lens of the unique bonds of friendship and partnership that forged between four men — James, Maverick Carter, Randy Mims and Rich Paul — over more than two decades. It is streaming now on ESPN+

The Jordan vs. LeBron debate even rages among former NBA players — and the answer isn’t divided as cleanly along generational lines as you might think.

Jay Williams explains why he credits LeBron James as the GOAT due to his willingness to speak out about social issues.

Kendrick Perkins ranks LeBron James as No. 1 on his list of top NBA players of all time.

One person who isn’t changing his mind any time soon is First Take’s Stephen A. Smith.

Stephen A. Smith and Kendrick Perkins are split on Isiah Thomas’ comment that LeBron James will surpass Michael Jordan as the game’s greatest if he wins a fourth championship.

When it comes to this debate, we’ll let MJ and LeBron have the last word — for now.

Michael Jordan says he takes the comparison between him and LeBron James with a grain of salt because they played in different eras.