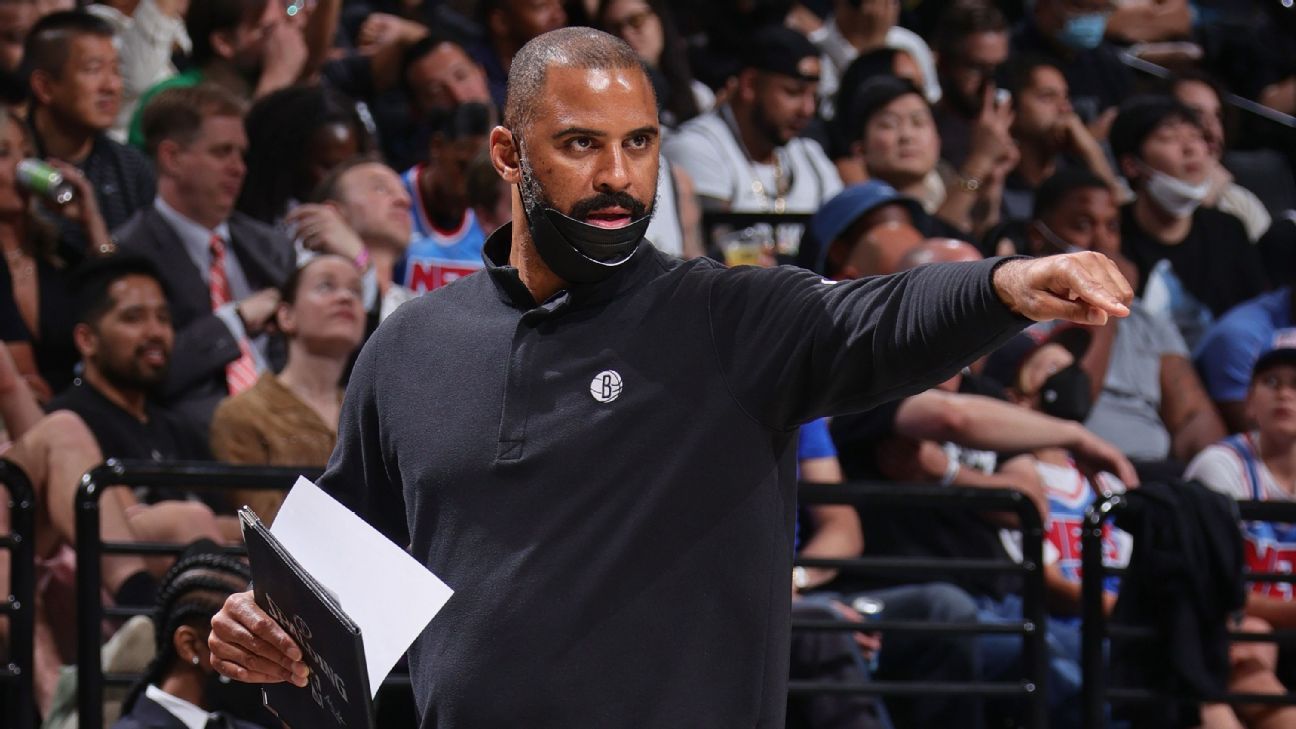 New Boston Celtics coach Ime Udoka said Monday that he’s excited to get the chance to work with the team’s young stars, forwards Jayson Tatum and Jaylen Brown, and, specifically, to push them as hard as he can to get even better than they already are.

“They’re going to allow me to coach them, push them,” said Udoka, who was introduced alongside his predecessor, and now Celtics president of basketball operations, Brad Stevens, along with owners Wyc Grousbeck and Steve Pagliuca, at a press conference at the team’s practice facility Monday morning. “They know I’m going to be on their ass, and that’s what they like about me, they’ve asked me about that. They want to be pushed, they want to be directed towards winning, and you expect that from your stars.

“The bottom line is they want to win, and help us get [championship] number 18. That part was attractive. Obviously you see the physical talent. Now this is a chance to see them grow and become better leaders, more vocal, and continue to push them to be great.”

He also said, in his initial conversations with both Tatum and Brown, as well as guard Marcus Smart, that they are all excited for him to do just that.

“I’m not worried about our group worrying about hard coaching,” Udoka said. “They are asking for that, and it’s something I’m going to bring to the table.”

Udoka built relationships with all three of them as part of Team USA’s program under one of his own former coaches, Gregg Popovich, when they were all part of the World Cup team in 2019. That was one of several stops Udoka has had since breaking into coaching after his playing career ended in 2012. He spent the next seven seasons working under Popovich in San Antonio, before moving on to be an assistant under Brett Brown with the Philadelphia 76ers for the 2019-20 season and then working under Steve Nash with the Brooklyn Nets this year.

As he went through the hiring process to name his successor, Stevens said that diversity of experience – including seeing the Celtics from the opposite bench each of the past two playoffs, when the Celtics beat the 76ers and lost to the Nets in the first round – helped sway Stevens toward deciding Udoka was the right choice.

“I did talk to a lot of people – some publicized, and many others that weren’t,” Stevens said. “Ultimately it’s an amazing group of talented coaches, whether they’ve been head coaches before or haven’t got their shot yet in the NBA. To separate yourself amongst all of them is difficult, but Ime did that. I go back to that he has a great basketball acumen, a great understanding, but that’s to me something a lot of people have.

“It’s his authenticity, his ability to be tough and yet very warm, and it’s his experience. Not only the experience of playing but being 8 through 15 on the roster a lot, and then being in San Antonio all those years, and then the last two years seeing totally different things up close in Philly and Brooklyn is a great thing. We could go on and on with the adjectives, but that really stood out as separating him throughout this process.”

Udoka is the definition of a grinder, having spent several years with minor league teams as a player before eventually breaking into the NBA first with the Los Angeles Lakers briefly in 2004, before later spending time with the New York Knicks, Portland Trail Blazers, Sacramento Kings and, most notably, the Spurs, with whom he played three seasons across two stints with the organization before transitioning into coaching. He joked that his time with many different organizations gave him an additional benefit in him having a wide pool of candidates to choose from for potential assistant coaches, something he said he’s continuing to work through.

But that time across different organizations also gave Udoka the opportunity to get to play alongside many different high level players from across the league, including Kobe Bryant, LaMarcus Aldridge, Tim Duncan, Manu Ginobili and Tony Parker. He said that experience has helped him in his transition to coaching in terms of his ability to relate to players – something he thinks will serve him well in Boston.

“I take it back to my playing days, whether I was a role player on a team I always connected well with the guys,” Udoka said. “When I was with the Knicks, Isiah Thomas was probably the first coach to mention that I would be a coach one day. He said you connect with the young guys. You’re not a 25-point scorer but they relate to you well, and you push them in the right way. So I took that into my coaching career, not just relationship wise as a player but as a coach.”

Not surprisingly, though, much of the focus of Monday’s presser was around the team’s young stars, Tatum and Brown, and how Udoka could help shepherd them to the next level of development in their careers. In looking at the landscape this offseason in terms of available jobs, Udoka said it quickly became obvious to him that the Celtics opening – thanks to the combination of long-term organizational infrastructure and stability, and the presence of Tatum and Brown – was the top job on the market.

And he said that his message to the two of them will be the same one he gave to Kawhi Leonard early in his career in San Antonio: don’t wait for anyone to give you anything.

“Talking to Kawhi Leonard as a young guy, I used to tell him, ‘Why wait? What are you waiting for? These guys, don’t give them too much respect.’

“And I’d say the same thing to Jayson and Jaylen. The sky’s the limit. The fact that you’re not All-NBA [this season], that should be a chip on your shoulder. You should play with that edge, and want to prove people wrong. But my message to them would be, ‘Why wait?’ The talent is there. The work ethic is there. It’s a chance to be a better leader, more vocal at times, but don’t wait for anything. Go out and take it now.”