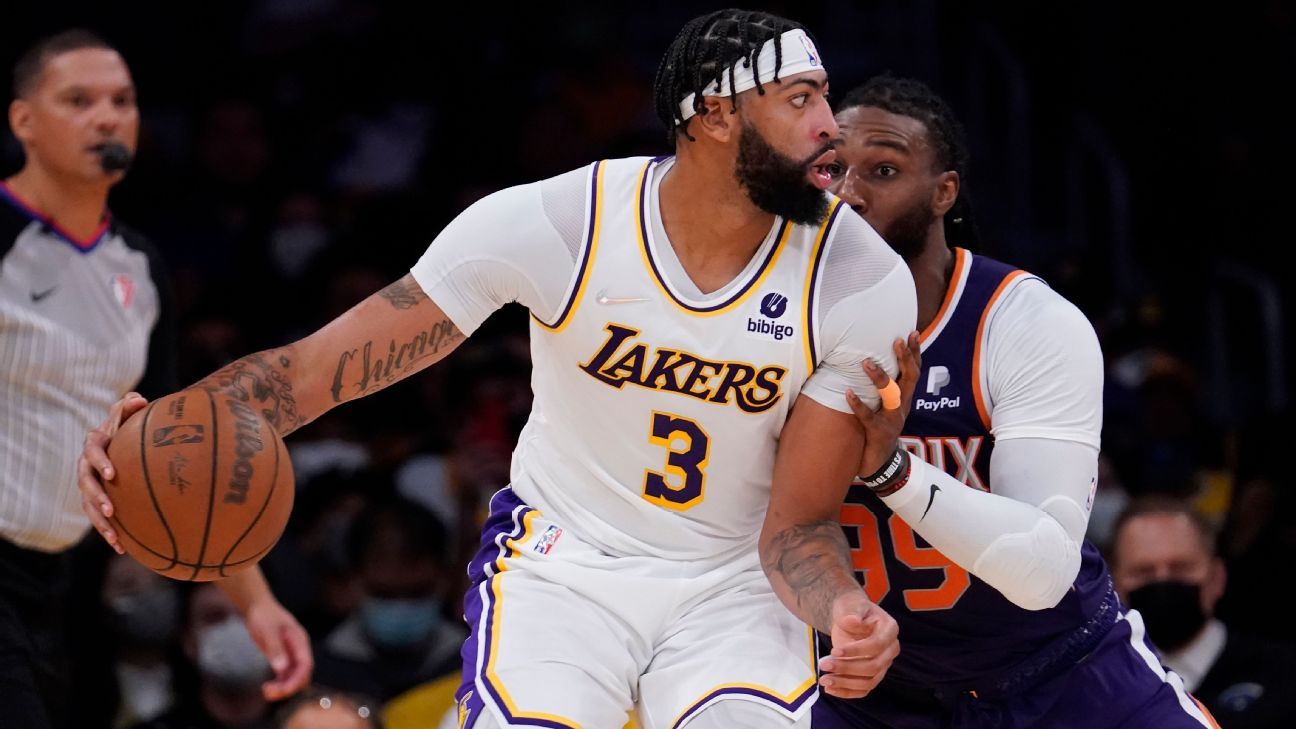 LOS ANGELES — As preseason losses have piled up, while the Lakers‘ revamped roster hasn’t even showcased all its stars in the same game yet, Anthony Davis admitted Sunday that Los Angeles’ disjointed dawn could seep into the regular season. But he isn’t sweating it.

“We want to be good, but we don’t want to skip steps. You can’t rush the process of what we’re trying to do and win championships,” Davis said after a 123-94 loss to the Phoenix Suns dropped the Lakers to 0-4 in their exhibition slate. “We know, possibly, there could be struggles to start the season. … But we never want to get out to a slow start — 0-5, 0-6, whatever — we still want to be able to fight through our mistakes while winning games.”

Davis said the Lakers will finally unveil their new Big Three featuring him, LeBron James and Russell Westbrook in Tuesday’s preseason game against the Golden State Warriors at home.

“It’s going to be a totally different story on Tuesday,” said Davis, who added he expected to be playing center with that lineup.

The Suns game was the first time Davis and Westbrook played together and while it wasn’t all bad — Davis finished with 19 points, six assists and three steals and helped key a 13-0 run in the second quarter when things seemed to click — there was still a lot to be desired.

Westbrook finished with more turnovers (nine), than points (eight), as he shot 3-for-12 from the field and the Lakers were outscored by 14 in the 26 minutes he was on the court.

This came after registering seven turnovers and shooting 1-for-7 from the field in his preseason debut on Friday.

“The turnover stuff is on me,” Westbrook said. “But good thing they don’t count. So, I could turn that b—- over 15 times, ain’t nobody going to do nothing about it. So, you know. Easy fix though. Very easy. Just because timing, just timing. Guys getting used to my speed, my pace, my timing, where I’m at on the floor.” ,

Then, echoing a sentiment shared by James on Friday night when the 19-year veteran said he cares “more about the practice court than I care about the preseason game,” Westbrook generally dismissed how he’s played so far.

“I never had one good preseason, I mean personally,” said Westbrook, a nine-time All-Star and former league MVP. “I never really worry about it because it’s preseason.”

While not exactly expressing fret for his new group, Lakers coach Frank Vogel did offer more pointed perspective after his team trailed by as many as 31 on Sunday — this after falling behind by as many as 22, 31 and 30 in their three previous preseason losses to Golden State, Phoenix and Brooklyn, respectively.

“We’ve got to get better,” Vogel said. “We haven’t played great. There’s going to be an adjustment period with so many new faces. It’s … we understand that. Hopefully it doesn’t take too much time to get everybody on the same page and in sync, guys getting legs underneath them and that type of thing, but we’ve still got to be better than we were tonight.”